The first in a series of articles on the difference between white privilege and white guilt. Pastor Jay Simmons sets the stage for an ongoing discussion.

As the media lights begin to turn their focus off of Ferguson, MO, we St. Louisans are left with deep questions about how to not only make sense out of what happened in the tragic death of Michael Brown but also how to pick up the pieces and move forward – hopefully – with some real racial healing. We have seen a great desire by the vast majority of our citizens for that kind of healing, but how do we begin? What stands in our way? What has historically kept us and continues to keep us racially divided? As a white urban pastor in this city for the last decade I have learned a lot. But if there’s anything I’ve learned the most is that I still have so much more to learn! So what I offer here is just a very small piece of the puzzle that I hope will be of some benefit to the journey ahead together.

This Tuesday night, August 26, the church I planted and co-lead pastor – South City Church – held a forum with some of the finest cross cultural faith leaders of the day. It was an amazing night where many voices of struggle and pain, hope and grace were heard and many very good and honest questions were fielded by the panel of my co-lead pastor Rev. Mike Higgins, Rev. Thurman Williams of Grace and Peace Fellowship, Lisa Sharon Harper of Sojourners, Mike McBride from PICO and Michelle Higgins, the Director of Worship and Outreach. They did an amazing job of helping all of us see the complexity of the problem but also the abundance of resources we have as a Gospel community to bring healing. There was one question – the first question actually – that I wanted to bring a little more perspective to. 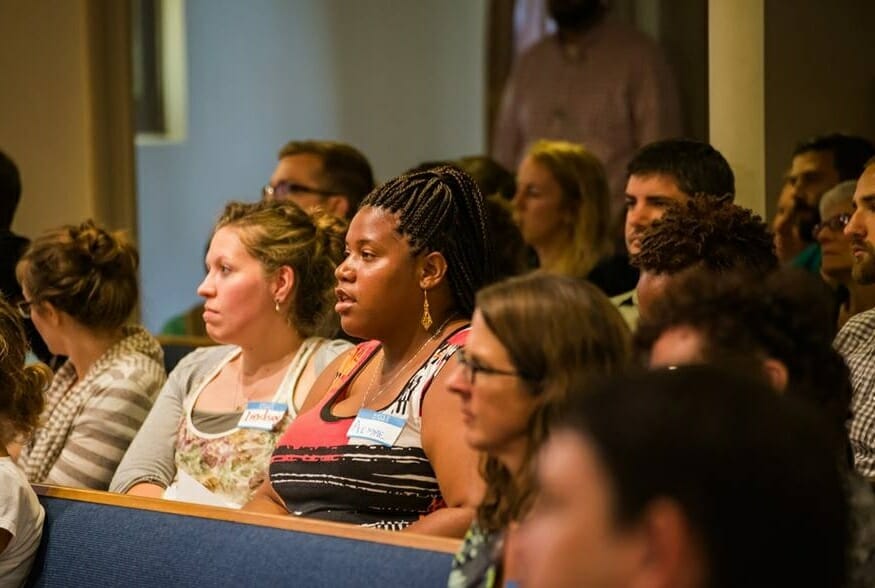 The question was something like: “How can I help my white friends and family who seem uncomfortable talking about white privilege see that it is real and needs to be addressed?” The answers from the panel as well as a few other white community leaders in the audience rightfully focused on the need to show the reality of white privilege in our world and gave examples from their own personal experiences of that reality. I was grateful for their answers and felt a deep need to go further for the sake of opening up a huge issue that I believe has been a large stumbling block for white people when it comes to addressing racism.

Human beings are by nature defensive creatures. Heck, I have a hard time admitting to my wife that I wasn’t listening to her very well when rightfully accused of that infraction! Sometimes when we talk about white privilege the same defensive mechanisms can go up amongst white people. While it may not in any way be intended, to say someone has white privilege can feel like being called a racist. And therefore, our defenses go up thus inhibiting us from engaging the topic in any healthy or constructive manner.

There is no doubt there are many white people who are blind to the racial problem in our country and are frustrated with African American who keep bringing it up. For them, there does need to be a holy reckoning with the fact that white people have sinned and continue to sin deeply against our African American brothers and sisters. They need to reckon with the fact that white people are guilty. But there are many other white people who clearly see, admit and repent of this truth but who continue to struggle with white guilt. For them, they respond to the perceived accusation of white privilege in one of two very negative ways: 1. They crawl into their safe, white hole and refuse to speak into the situation out of fear of appearing racist, or 2. They go to work out of that guilt to make amends to black folks for the generations of atrocities our white culture has committed by doing works of mercy and justice and love. Good works, mind you, but badly motivated by guilt. Those kind of works amount to penance and are antithetical to the Gospel of grace and therefore provide no lasting benefit. In fact, they may serve to push the races further apart.

My exhortation to white people stuck in white guilt is this: White privilege doesn’t mean you are racist. It is just a reality of the broken, unjust culture we live in. It is a bad reality. But it’s not your personal fault for it. If you want to really be a part of the Gospel solution to the issues of race in our day and our city, start by recognizing the reality of the problem, grieve it as “not the way it’s supposed to be”. Recognize that it IS a result of white atrocities committed – even if they aren’t personally yours. Repent for any personal sin you DO have that has contributed to the problem. And then, receive the grace of God for you – the grace Christ has won for us: “[14] For he himself is our peace, who has made us both one and has broken down in his flesh the dividing wall of hostility [15] by abolishing the law of commandments expressed in ordinances, that he might create in himself one new man in place of the two, so making peace, [16] and might reconcile us both to God in one body through the cross, thereby killing the hostility.” (Ephesians 2:14-16 ESV) Only then – in forgiveness – can you move out redemptively reconciled to your African American brothers and sisters and be part of the Gospel healing of the community.

And my humble suggestion my black brothers and sisters: I completely understand and affirm the passion you have for talking about white privilege with true words of hurt by the injustice of its reality. Please help white people grieve with you by clearly defining that white privilege is not a personal accusation but rather as a very sad state of our culture that needs redeeming by all of God’s people together.